The recent ban by the Trump administration on transgender people serving in the military has raised the awareness among Americans about the issue of sexual identification. Whether it “points to a fundamental repurposing of the federal bureaucracy to promote conservative social priorities” as noted by the New York Times is beside the point to an adolescent who has realized that he or she is not like many of his or her peers.

Sometimes, a pediatrician is the first person to learn about the sexual identity of these young patients, and without proper medical guidance, counseling these children and their parents is problematic. A previous post about this subject offers an excellent overview of this challenge, and it suggests that a pediatric-focused EHR platform, such as that of PCC, can help a physician navigate very treacherous waters. 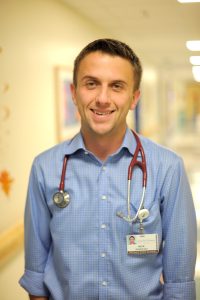 As a part of his final year at The University of Vermont Medical School in 2016, Nick Bonenfant investigated the need for resources in the college community for lesbian, gay, bisexual and transgender (LGBT) students for his thesis. As a part of this research he discovered several gaps in knowledge about these groups.

“We found a lack of a central resource for pre-exposure prophylaxis (PrEP) for HIV  prevention,” Bonenfant said. “The medication is called Truvada. It is a pill that an individual would take every day, and it reduces the risk of acquiring HIV if they are exposed to it. It is really a remarkable drug with more than 90 percent efficacy.

“There was an issue in Vermont with patients asking their physicians for this PrEP and their providers being unaware of the drug. This was a serious gap in knowledge, and in our discussions with the LGBT community we found understandable frustration. There were providers who were not comfortable prescribing this drug to patients who would have benefitted from it.

“As a part of my senior thesis, I put together a module for this drug that included indications for its use and monitoring patients who were on it. We were able to present this to several groups in Vermont, including the 'Didactic Series for Family Medicine Residency' and pediatric program at the University of Vermont Medical School.

“The more I presented this module the more it became obvious that there was a need for additional informational resources for this community. Over my fourth year of medical school, I was able to develop three more modules, all of which were pediatric-specific.

“One dealt with transgender medicines and resulted in a comprehensive explanation of transgender pubital depression and information on hormonal therapy. This research also offered data and literature that will help improve care for these trans kids through office-based EHR strategies.

“The UVM pediatrics department is very progressive in treating this population. For example, we have a trans clinic for kids here, and I have the opportunity to help out there. Vermont is ahead of the curve on this issue, and it’s pretty exciting to be a part of it.”

Discussing Sexual Orientation with a Patient

Having a conversation with a young patient about their gender identification is a difficult task for most pediatricians. Bonenfant has some thoughts about this.

“From the first year of med school, we had a great deal of training on talking about sex in mock interviews,” he said. “Talking about sex with a patient, especially when it is a child, can be very uncomfortable. Plus, for some practitioners, talking about sexual orientation and gender identity is even more uncomfortable. However, the more discussions a pediatrician has about this subject matter, the easier it is to have the conversation with the patient.

“In the case of transgender patients, there is also a lot of confusing terminology that the doctor uses. Unfortunately, those terms don’t necessarily mean the same things to the patient. Having a discussion about who an individual really is can be very daunting to the pediatrician.

“I think the pediatrician has an ethical responsibility to talk with all kids about how they see themselves and whom they see themselves as being close to – whether it is friendships or relationships. When it comes to providing the most competent care specifically for our trans kids, I believe there is an ethical requirement for the doctor to talk about these issues because this group has a higher incidence of anxiety and suicide.

“Just as a pediatrician would want to anticipate the increased risks for diabetes in an obese child, he or she must understand the increased mental health risks for LBGT kids. They deserve a great support system and this can only come about when there is an understanding on the part of their physician.”

The PCC EHR platform is designed exclusively for pediatricians. It contains content that can help doctors better communicate with LGBT children.

“One of my colleagues in medical school is now an adolescent fellow who is ‘leading the charge’ on getting the patients preferred pronouns and preferred names in EHR systems. What we have found at the trans clinic at UVM is that, if you have a patient who was born female but identifies as male and uses a different preferred name and pronoun, this is not reflected in most EHR platforms.

“If these patients are presented at the emergency room and their preferred identity is not captured in the EHR, this can cause anxiety and frustration for patients.

“The most recent Bright Futures guidelines, available in the PCC platform, have several recommended topics to discuss among adolescent patients. During the well visits gender identification and sexual orientation are covered. We are talking to the patients in the interview rooms about these issues, but there are even more things that can be done and the EHR system can certainly help in this process.

“Research has suggested that the first person a child will share their sexual orientation with is often a pediatrician. If this information is handled with care, it can serve as a springboard for the patient getting needed support. As pediatricians, we can also help children discuss their orientation with others if they decide it would help them to have this conversation.”