At its peak in the 1950s, the polio epidemic infected 25,000-50,000 people annually, and 3,000 died of this paralyzing disease in 1952 alone. Infectious disease experts, public health officials and physicians were concerned, but the parents of young children were scared. Unlike any disease before, the images of children in iron lungs, wearing leg braces and needing crutches to walk galvanized the country to find a way to end this deadly disease.

All EHR platforms are not alike. For information on how the PCC pediatric-focused system can help you intervene and treat childhood obesity among your patients, contact us.

Many Americans who are now parents and grandparents have some recollection of the emotional trauma that the polio epidemic caused, and the human misery related to the disease, especially to children, was horrible. However, there is a more contemporary epidemic that affects children and has the potential for devastating consequences. It is childhood obesity.

The Center for Disease Control and Prevention (CDC) estimates that about 20 percent of children between the ages of 6-19 are clinically obese. This means they have a Body Mass Index (BMI) rating that is equal to or greater than the 95th percentile. This represents millions of children “infected” by this disease.

While there has been some improvement in the intervention and treatment of obese children in the last decade, some pediatricians have found a tool that can help reach kids before the develop complications and intervene before they become obese.

On the Ground, Fighting Childhood Obesity

Dr. Robin Warner is a pediatrician in Union, Kentucky, and she is on the front lines of the war on childhood obesity. In this community, about 12 miles south of Cincinnati, Ohio, the incidence of clinically obese children in her practice is about one and a half times that of the U.S. average, ranging from 30-35 percent.

Dr. Warner has first-hand knowledge of obesity’s impact on the lives of these youngsters. “Unless we have a successful intervention and treatment, these children will become diabetics, suffer heart disease, have high cholesterol and lipids, and will likely suffer from obstructive sleep apnea that can lead to heart failure.

“Many of them will be bullied by other children, they will have low self-esteem and some will become depressed. The physical and emotional health risks are real and treating obesity is one of the daunting challenges of pediatric medicine.”

“I used general medicine EHR platforms for four years,” she said. “And they tend to be just that—general. Pediatrics was an afterthought, not a primary focus.

“A pediatric-specific platform, such as PCC’s, contains not just CDC growth charts Age for Preterm Growth Charts and Vitals Percentiles but also World Health Organization (WHO) growth curves, which are recommended for children under two. With the PCC platform we also have the only valid Down Syndrome and latest Fenton Preterm charts.

“PCC has also incorporated the American Academy of Pediatrics’ (AAP) Bright Futures guidelines into their EHR, which includes links to the AAP’s Pediatric Care Online patient education handouts and with a push of a button, these handouts can be given directly to the parents, using the PCC portal. While it is not related to preventing childhood obesity, the vaccine logic of the PCC platform is another helpful feature that many general EHR platforms fail to provide.”

A Platform for Pediatric Practice Management

Running an efficient practice allows pediatricians like Dr. Warner to spend more time with her patients.

“PCC’s practice management software is capable of ‘recalling’ younger patients who are overdue for ‘well-child’ checks, since this is required more often than once a year. The general EHR platforms treat these well visits as an annual occurrence, which isn’t the case for kids younger than three.

“The PCC dashboard feature summarizes how well practices are doing with regard to performing those tasks recommended by the AAP Bright Futures guidelines. A practice can see what they’re doing well, and what they can improve on.”

An EHR Platform That Educates Parents

One of the most difficult challenges a pediatrician must confront is a parent who refuses to admit that a problem exists. The PCC EHR platform can help parents better understand the effects of obesity on their child.

“A visual display is often effective to show parents that their child is obese,” Dr. Warner said. “Some parents mistakenly think that a growth curve percentile is similar to an academic grade, where the higher the number, the better. Showing them the curve, especially if there has been a huge jump, is often eye-opening. 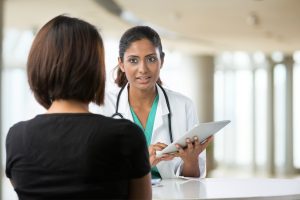 “PCC offers a care plan feature where all obesity management advice can be documented. This feature is available on the patient portal, to which parents have access. In addition, any handouts from the AAP’s pediatric care online education section, as well as any handouts created by the practice, can be posted to the portal for the parent to access at any time.”

Former First Lady, Michelle Obama’s signature program was “The Partnership for a Healthier America” and PCC was one of three vendors that worked with this healthy eating program to build features not found in other systems. These include:

The Obesity Epidemic is Getting Worse

“In my opinion, this childhood obesity trend is getting worse,” Dr. Warner said. “There are many contributing factors.”

“Many households now have two parents working, which means children go to daycare, a pre/post school program, or they are watched by someone else (often grandparents or family members). Children are woken from sleep at the last minute and then eat some high-carb processed food, such as donuts or Pop-Tarts, in the car. In our area of Kentucky, if food is provided at the school, it’s more of the same, with maybe some high fat meat/buttered biscuit added in! Plus, after school snacks are no better, usually consisting of high sugar juices and cookies.

“After a long day of work, parents often don’t have the time or energy to cook a healthy, well-balanced dinner, so they resort to fast foods or easy-to-prepare, but unhealthy, pre-made meals. This often consists of meat and carbs with no fruits or vegetables. Many young parents today don’t know how to cook if it involves more than pushing a few buttons on a microwave. They think a fruit roll-up counts as a serving of fruit.

“Exercise in school is virtually non-existent. Physical Education has been reduced from 30 minutes, three times per week to once every week and a half in the elementary schools. In middle schools, it has gone from half year to 6 weeks out of the year. Even when there is PE class, it doesn’t focus on anything that could lead to a lifelong, lifestyle change.

“There is also an electronic device usage crisis among children that encourages a sedentary lifestyle instead of physical activity. Preschool children throw tantrums if they can’t have a device, while older kids and adults are inseparable from theirs.

“And finally, adults and, especially, children are not getting enough sleep,” she said. “Studies have shown that a lack of sleep leads to obesity.

With this many factors at work, there is little wonder why rates of childhood obesity are skyrocketing. If allowed to continue, this could lead to a future healthcare system that is overwhelmed by these kids who have become very unhealthy adults. However, there are also intelligent and passionate pediatricians, such as Dr. Robin Warner, who refuse to give in or give up. Dr. Warner is dedicated to helping her young patients and their often well-meaning, but uninformed, parents overcome this obesity epidemic.