What are ACEs? 6 Resources for Physicians to Care For and Prevent Youth Trauma

One in four American adults has one. Sixteen percent have two. One in ten has three and over 12% of Americans have four Adverse Childhood Experiences (ACEs). Thanks to two major studies by the CDC, researchers are beginning to more intimately understand the effect of early childhood traumas such as neglect, physical abuse, emotional abuse, or parental mental illness. We can now determine that ACEs and negative adult health and lifestyle outcomes are directly related. While research continues to better understand prevention, treatment, intervention, and care for children and adults with ACEs, there are still things your practice and community can do to prevent and care for these families -- offering treatment, education, and a sign of hope.

Adverse Childhood Experiences (ACEs) is, according to the CDC, “the term used to describe all types of abuse, neglect, and other potentially traumatic experiences that occur to people under the age of 18.”

These traumatic experiences are linked to risky behaviors, poor adult health, opportunity costs, and early death. As the number of ACEs increases, the risk for these outcomes does too. The three major categories of ACE types are abuse (physical, emotional, sexual), household challenges (domestic abuse, substance abuse, mental illness, incarceration, separation or divorce of parents), and neglect (physical or emotional).

Everyone experiences stress; it is a biological urge to survive and find safety and success. While many Americans have at least one ACE (26% according to VetoViolence), it is important to note that adverse experiences create what is known as toxic stress, which is chronic, excessive, and results in a negative response from the body over time. According to the National Institutes of Health, when cortisol levels remain high over a prolonged period, they will eventually affect the brain, the immune system, and the patient’s psychology: “Diseases whose development has been linked to both stress and inflammation include cardiovascular dysfunctions, diabetes, cancer, autoimmune syndromes and mental illnesses such as depression and anxiety disorders.”

Resilience is often seen as a key factor in lessening the damaging effect ACEs can have on a child’s psychological and physical development. The APA defines resilience as “the process of adapting well in the face of adversity, trauma, tragedy, threats or significant sources of stress — such as family and relationship problems, or serious health problems.”

Resilience is a learned quality which can be invaluable in children and adults at risk for ACEs. To build resilience, the child and family make connections to friends and community, build healthy emotional responses to stressors, and are able to attain the support they need in order to make decisions which will impact their lives positively.

The first major study instrumental to the growing understanding of ACEs was led by the CDC, referred to as the CDC-Kaiser ACE study. The study was conducted in two waves from 1995 to 1997 by the CDC at Kaiser Permanente. The second major data set is an ongoing series of telephone surveys collected by all 50 states via the CDC’s Behavioral Risk Factor Surveillance System (BRFSS).

Both the study and the ongoing annual data associate ACEs concurrent to increasing likelihood of negative health outcomes such as chronic disease, early pregnancy, substance abuse, cognitive disability, and even early death. ACEs are also associated with adverse life experiences such as rape, depression, anxiety, and inability to form strong relationships and social bonds.

It is important to note that studies have not concluded that ACEs are the causation of these negative conditions, experiences, or diseases, but according to the CDC, they are strongly related to the development of risk factors which could result in any or multiple of these negative consequences.

A pioneer in linking ACEs to adverse adult health outcomes is Dr. Nadine Burke Harris. Dr. Burke Harris was sworn in as California’s first-ever Surgeon General in 2019 and continues to be an advocate for ACEs research and prevention. Dr. Burke Harris was also a cofounder of The Center for Youth Wellness in 2012, as a “clinical model that recognizes the impact of adverse experiences on health and effectively treats toxic stress in children”. The Center for Youth Wellness focuses on addressing ACEs in the San Francisco Bayview/Hunter’s Point region due to the neighborhood’s high poverty rate. Poverty was named as one of the mechanisms of developing ACEs and subsequent negative health outcomes during the CDC-Kaiser Study, as shown in the ACEs pyramid. 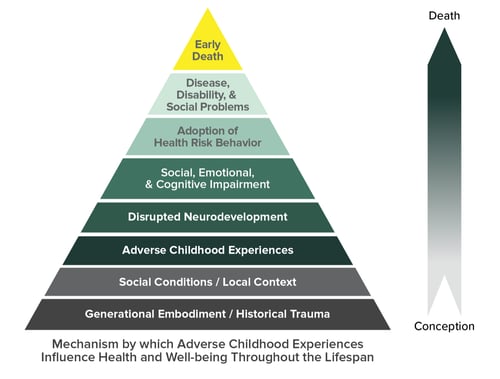 Resources for Pediatricians: A Guide to ACEs

The ongoing study of ACEs makes it difficult to gather all up-to-date resources for the science, care, prevention, and intervention of ACEs for pediatric offices in one place. However, both the CDC and AAP have invaluable guides for getting to know what ACEs are, the signs to look for, and how to pose these important but difficult questions to determine the children who have ACEs or are at risk.

Here is a list of the top sources for pediatric offices seeking to treat and prevent ACEs:

The ongoing treatment, prevention, and care for ACEs includes an evolving medical system that coordinates care between PCPs and psychological care, including psychotherapy, psychiatry, mental health counselling, and educational programs.

The nature of ACEs means that early intervention in key in lifelong treatment and care for children who need support systems to help them along the way. These resources are intended as a guide to lead you to the steps outlined by the AAP for intervention of ACEs: identifying children at risk, establishing relationships with community resources, making referrals to appropriate sources of care, and equip families with the knowledge and tools to build resilience and change the maladaptive patterns that can occur without the support of compassionate communities.

To learn more about integrating services into your practice to help with ACEs and other behavioral problems, visit our BHI post below.

Allie Squires is PCC's Marketing Content Writer and a transplant from upstate New York. She holds a master's in Professional Writing from NYU.

Voice cracks, acne, hair sprouting in new and alarming places…we all went through that..

Today’s young people have access to more information via the internet and the media than their..

The continued search for improved technology and medications for type 1 and type 2 diabetes..