What Does the Trump Administration Mean for the Healthcare of Children?

One of the most contentious issues of the Presidential campaign of 2016 involved health insurance – specifically the “Affordable Care Act” (ACA) – which was one of President Barack Obama’s signature pieces of legislation. As with any legislation which deals with an issue of this complexity, the ACA pavement of good intentions was littered with many potholes.

Throughout the campaign, candidate Donald J. Trump vowed to “repeal” the ACA within the first 100 days of his setting up shop in the Oval Office. As the world now knows, candidate Trump became President-elect Trump on the first Tuesday of November and he will also be joined by a majority of fellow Republicans in both the U.S. House of Representatives and the U.S. Senate. As of the publishing of this post, this situation remains fluid and will likely change many times before final Congressional action.

What the Trump Administration and Congress can or will do about the millions of adult Americans who now have access to health insurance courtesy of the ACA remains to be seen, however the pediatricians who treat the middle and lower income children by virtue of funding from the Children’s Health Insurance Program (CHIP), extended by the ACA, are also concerned about the new administration.

In order to better understand the ramifications of the CHIP and Medicaid programs on the delivery of healthcare to middle and lower income children in the United States, some historical perspective is needed.

A History of Positive Outcomes 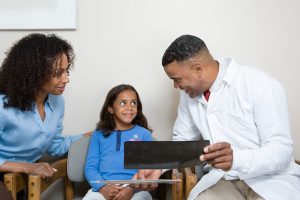 According to the Kaiser Family Foundation, a non-partisan healthcare think-tank, “The Children’s Health Insurance Program (CHIP) was established in 1997 to provide coverage for uninsured children who are low-income but above the cut-off for Medicaid eligibility. CHIP and Medicaid combined cover more than 1 in every 3 children in the U.S. “

The foundation discovered that Medicaid and CHIP have “significantly expanded health coverage among U.S. children” with the uninsured rate falling by half. It also noted that the benefits and out-of-pocket expenses were better for families with the CHIP program and these covered children had “much better access to specialist and dental care.” Finally, the foundation identified compelling evidence that Medicaid and CHIP expansions have had “a positive impact on health outcomes, including reduction in avoidable hospitalizations and child mortality.”

The American Academy of Pediatrics (AAP) has also been a strong supporter of CHIP. In October 2016, the organization sent an organizational support letter to Congress, urging the continuation of the program.

There’s a New Sheriff in Town

In spite of meeting most of the metrics of cost-effective healthcare, the CHIP and Medicaid programs are in the cross-hairs of the new administration for ideological reasons and, depending on how this political dust settles, the already tenuous finances of most pediatric practices will be impacted.  To combat industry challenges like this,  the leader of the Pediatrics Solutions team for Physicians Computer Company (PCC), Chip Hart spends every work day counseling pediatricians on ways they can streamline their businesses through more efficient management of electronic health records (EHR) and practice management . Recently, Chip was asked to draw on his experience to offer insights about what the new administration will mean to this medical specialty.

“This CHIP program was originally a ‘gap’ program to help children and pregnant women who were not poor enough to qualify for Medicaid but were unable to afford health insurance,” he said. “There are a large number of middle income families covered by this program and about eight million kids are covered.

“Many people feel that insuring children is the ‘moral’ thing to do, but there is another, more pragmatic reason for having a program like CHIP. If a child does not receive wellness visits, dental care, vision care and the other services funded by CHIP, their health problems will be vastly more expensive as adults due to chronic illnesses such as diabetes and heart disease. Many people fail to see the CHIP program as the ‘investment’ in lowering healthcare costs in the future.”

What Does the Trump Presidency Mean for Children’s Healthcare?

Based on his statements from the campaign about federally funded health insurance and his proposed appointment of Representative Tom Price (R-GA) who, in addition to being an orthopedic surgeon, has been a vocal critic of the ACA and other federal insurance programs, most political observers agree that there will be substantial changes in the way middle and lower income families will pay for healthcare under the new administration. Chip explains.

“If experience is any indication, it will be difficult to predict what President-elect Trump will do once he is in office,” he said. “He has made many promises – including the immediate dismantling of the ACA – but nobody really knows where he will ‘go,’ and what Congress will agree to, until Day 1.  However, one thing is abundantly clear: the Republicans have had seven years to come up with something better than the ACA and no alternatives have been forthcoming.

“When talking with our clients, we hear pediatricians speak about the importance of the CHIP program because it provides vital coverage to our most vulnerable populations. However, no pediatrician is getting wealthy because they have a lot of CHIP patients,” he laughed.

What about Block Grants to the States?

Some Trump watchers have suggested that this new administration might decide to change the CHIP and Medicaid program by giving the states block grants for paying for children’s healthcare. How will this affect pediatricians?  Hart explained.

“It really depends on what state we are talking about, “he said. “Let’s not pretend that every state values the health care of children equally.  Some states have poor track records for taking care of the health of their children, while others are more attentive.

“If the block-grant approach could remove some of the federal requirements and overhead from the CHIP program, that would certainly be an improvement.  Also, if this block grant approach could allow primary care physicians such as pediatricians to be paid on a ‘par rate” (the Medicare rate), this would be an excellent improvement over the current approach.”

What Part Will EHRs Play?

The new administration will make medical business management even more important than it was before and EHR is important to this process.

“Accurate and timely practice management data will be critical in dealing with the new federal insurance landscape,” Chip noted. “Knowing such things as profit centers and cash flow are critical to running a practice as a business. This will be very important with the new way healthcare will be paid for.

“Most pediatricians are not good at running a business,” Chip said. “A robust EHR platform can help with this.  PCC offers pediatric-specific reporting that enables a physician to look at his or her practice and determine what impact a reduction in CHIP payments can have on that practice. If these payments are reduced or removed entirely, the management of the practice can re-group and focus on other areas.  They can also use their EHR system to message these patients and keep them informed as to what changes the new administration makes and how they can deal with them as far as what services are covered.

“Proper re-enrollment for insurance is also a benefit of the PCC electronic health records platform. As the programs change, it will become more and more important to track the criteria of payers for these services. This allows the practice to serve as a valuable source for patient communications.

“Another important change involves the recently passed MACRA legislation,” he said. “This involves turning Medicare into a ‘fee for performance’ as opposed to just ‘fee for service’ and the CHIP funding is attached to this new law. Because this MACRA law was bipartisan, this could mean that the CHIP funding will stay in force through 2018.”